The maze of narrow streets which cascades down the hill from the cathedral terminate at the beautiful and iconic quayside, the Cais da Ribeira. The riverfront faces the Port houses of Vila Nova de Gaia on the opposite bank that is accessed across the famous Ponte Dom Luis I bridge. Ribeira is one of the city's oldest neighbourhoods which once served as Porto's harbour. Cargo was offloaded here from both up and downstream. Today the hubbub is comprised of tourists who take advantage of the incredible sights and attractions here. The numerous colourful buildings – hotels, restaurants, gift shops, artisan workshops and cafés, were once warehouses and merchant buildings. Behind the riverfront, the city slopes steeply up in a warren of medieval streets and alleys such as the Rua da Fonte Taurina and Rua da Reboleira, which despite initial appearances, hide some of the Ribeira's best and most authentic restaurants. Survival of the timeless charms of this area is now protected since it's part of the UNESCO World Heritage Site from 1996. Picturesque and charming during the day and lively during the evening, Cais da Ribeira is probably the most visited area of Porto.

There's an open space on the quayside called the Praça da Ribeira. It is lined on one side with bars and restaurants which stay open when all others on the river's edge close. Taking centrepiece of the square is a curious bronze water feature called "O Cubo", designed by Jose Rodrigues. It represents a cube held aloft by jets of water with false bronze pigeons stuck to its sides share the space with real birds. This contemporary fountain stands in the place of a much older water feature.

Overlooking the square standing, inside his niche below the Portuguese coat of arms, is a small statue of John the Baptist. He is the patron saint of the city and inaugurated in 2000. It's a feature attached to the end wall of a three-story building where you'll also find a much older fountain dating from the 1780s. The square was created after a fire cleared the area in 1491. | 41º 08' 26.8" N | 08º 36' 46.9" W 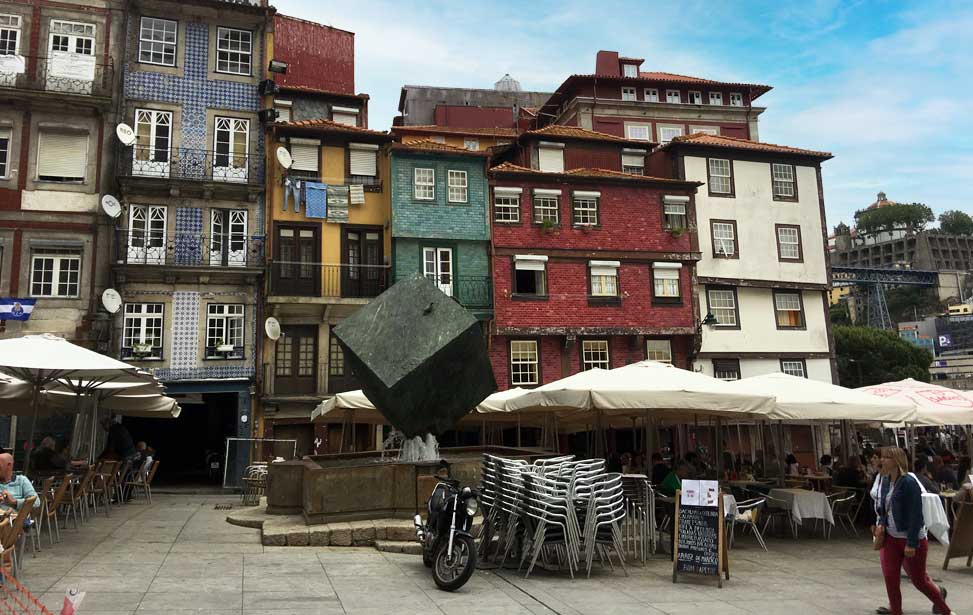 EAST ALONG THE RIVER FRONT 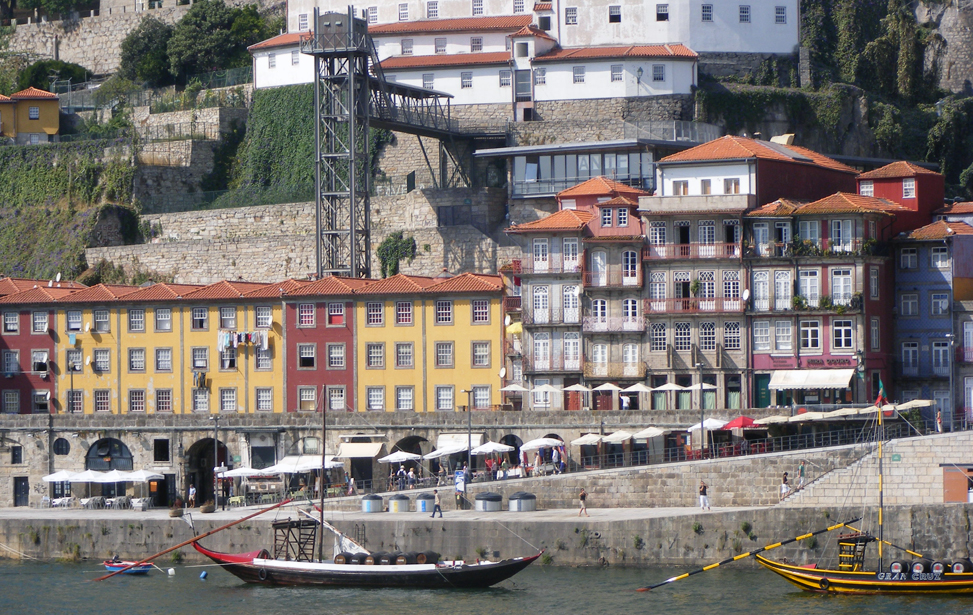 The walk east along the riverfront towards the Dom Luis I bridge is dominated by restaurants. They occupy former merchant warehouses on ground level. In-between arches are hidden courtyards that host some great hideaway places. There's also a walkway above the warehouses, the Rua de Cima do Muro, where there are even more restaurants. The outdoor seating is busy at all times of the day. Here too you'll encounter many street entertainers, buskers, human statues and street traders. All-in-all, the riverside is a buzzing hive of activity.

Tucked away in one of the small squares behind the riverside, next to the Taberna da Lada, is the lower terminus of the little known Elevador da Ribeira (also known as the Ascensor da Ribeira). It will whisk you halfway up the hill in just enough time for you to take a few photos along the way, free of charge.

Moored up on the quayside and the Cais de Estiva are several tour boats that offer tourists trips up and down the river. There's plenty of choice of tours with varying duration and agendas, ranging from an hour or so to a whole day cruise.

On the eastern end of the quayside, opposite to the Pillars of the Old Suspension Bridge (Pilares da Antiga Ponte Pensil), is a tiny chapel that has the impression of being squeezed in by its neighbours. Topped by a single bell tower, its façade is Baroque in a style that is a clue to its age. Its single nave interior is also white with flashes of gold gilding. The interior is illuminated by a leaded window above the entrance.
Rua de Cima do Muro 12, Porto 4050-200 Portugal. | 41º 08' 27.1" N | 08º 36' 37.3"

The Guindais funicular railway descends 61 metres (200 ft) down the steep cliff from Batalha to the quayside at Ribeira opposite the bridge entrance. The three-minute journey is used by commuters and tourist alike. The original was built in 1891, yet the current service dates from 2004. As the self-levelling cars climb down the hill, it follows the line of the medieval walls. Giving a birds-eye view of the Dom Luís I Bridge and Gaia beyond along the way. The funicular is an ideal way to traverse the steep hill between central Porto and the Ribeira, saving time and tired feet.

It's operated by the Porto Metro company and accessed using the Andante ticket, allowing a trip on the funicular to be combined with a journey on the Porto Metro and selected bus routes.
Monday to Friday: 08h00 – 20h00, Weekends: 08h00 - 00h00 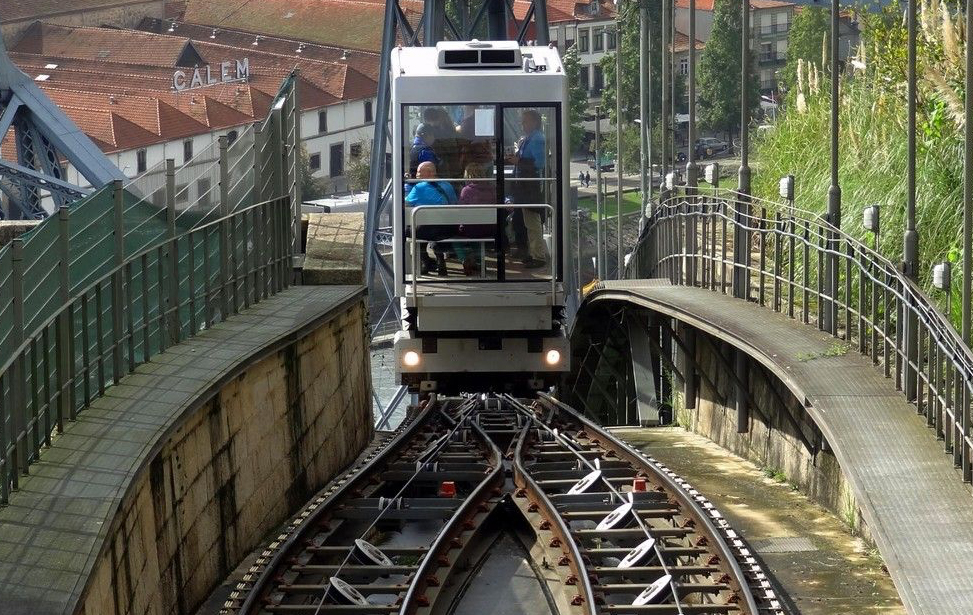 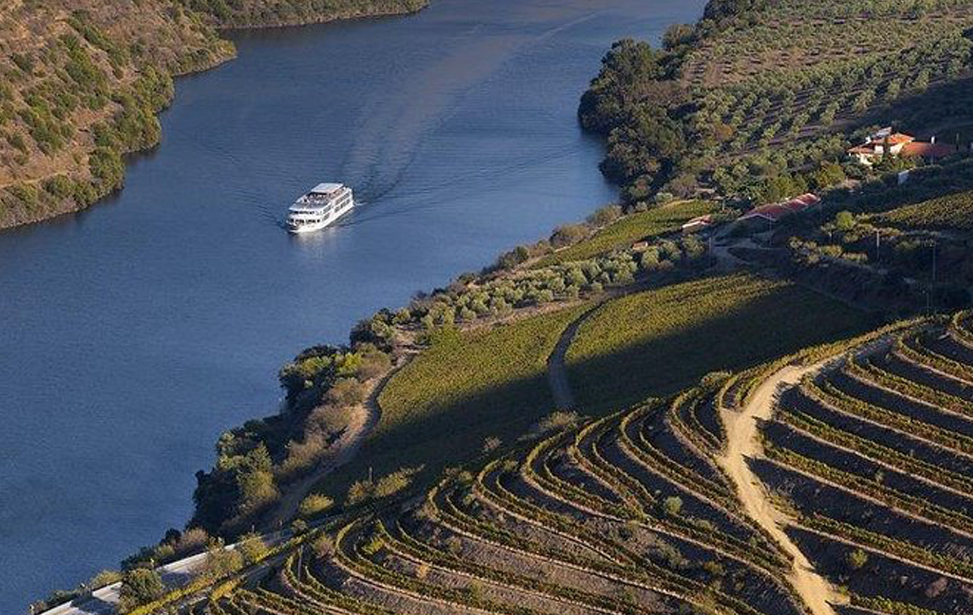 Day Cruise from Porto to Pinhão with Breakfast and Lunch

Soak up the beauty of Northern Portugal on this full-day cruise from Porto to Pinhão. Known as the heart of the Douro Valley, Pinhão is a traditional village that embodies Portuguese charm. The best way to see it is by boat. Enjoy breakfast onboard the vessel as you cruise up the Douro River, admiring the lush mountains and peaceful waters. In Pinhão, explore the village and visit winery estates and enjoy lunch before heading back down the river to Porto where your tour concludes. 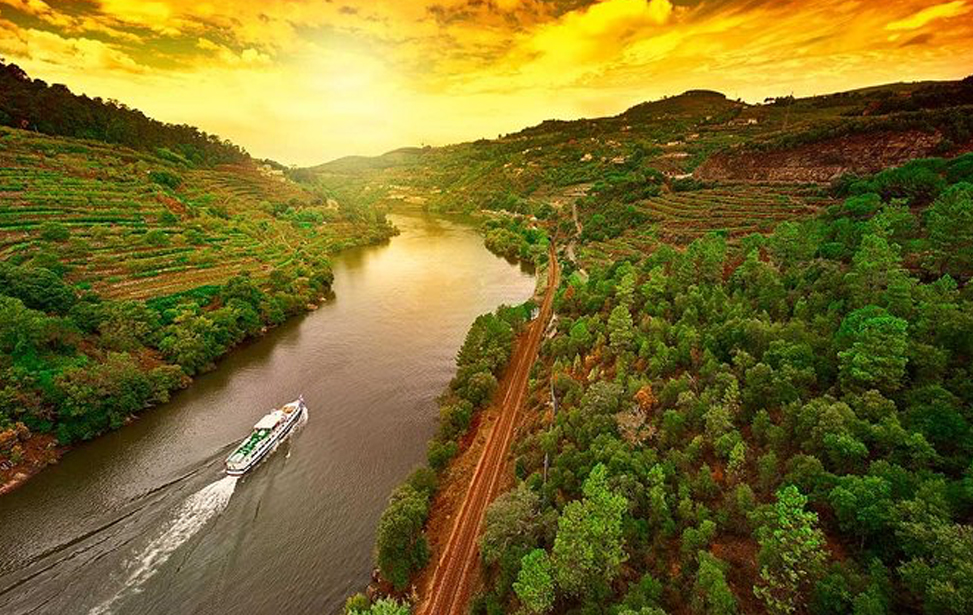 Discover the UNESCO-listed splendour of the Douro Valley on this full-day trip to Régua from Porto, including a return boat ride. During a scenic train ride to Régua, you’ll see vineyards and valleys before you board a cruise ship set to sail down the Douro River. On this day trip to Régua an onboard lunch is included. 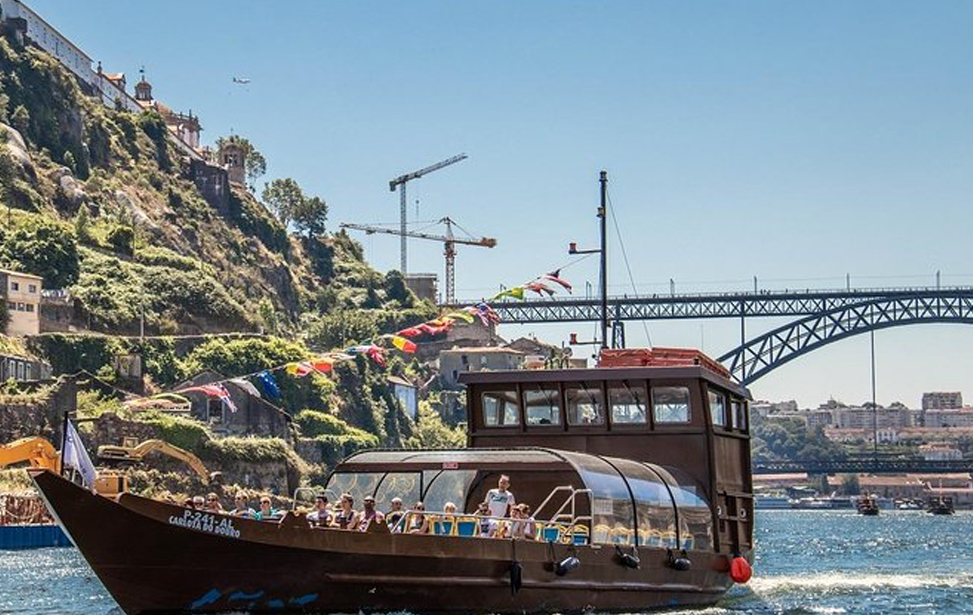 Experience all of Porto’s bridges on this 50-minute cruise of Porto’s six bridges. Coast down the peaceful waters of the Douro River by boat as you see Porto to one side and Gaia to the other, and all of Porto’s stunning bridges connecting the two cities. You’ll quickly notice that no two bridges are alike, each with its own architecture and personality, making for stunning photo backdrops. As you sail the UNESCO river, you’ll see why this is one of the most unique ways to experience Northern Portugal.

WEST ALONG THE RIVER FRONT 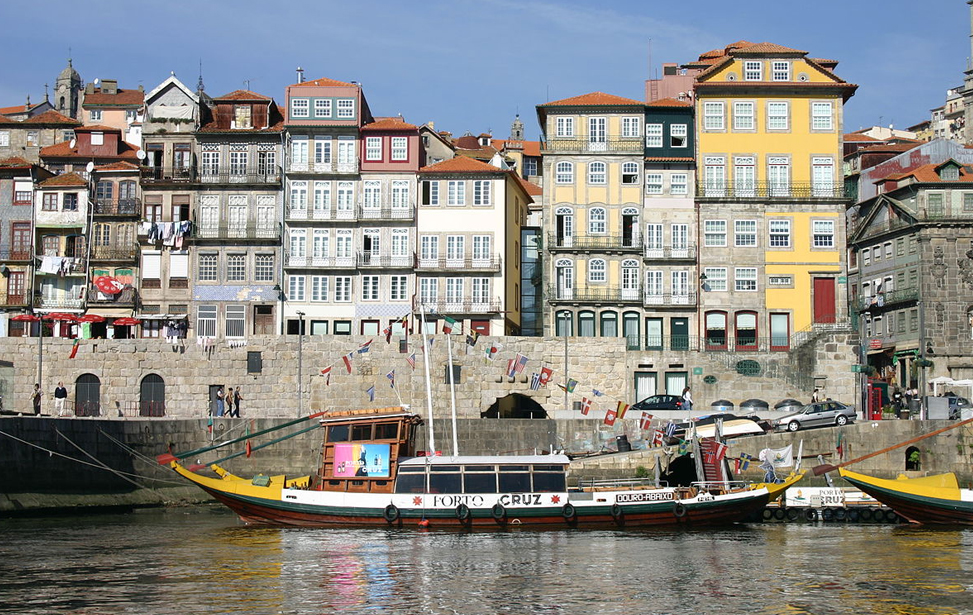 The quayside becomes a little wider West of the Praça da Ribeira, the beautiful yellow Pestana Vintage Porto hotel stands on the corner of the Cais da Estiva. There are restaurants, cafés and wine bars along this area but fewer in number, thIS end of the quayside has a more relaxed atmosphere. The quayside ends with the Largo do Terreiro, from here the path leads you past the Casa do Infante museum up to the Praça do Infante Dom Henrique where you'll find the Palácio da Bolsa, Igreja de São Fransico church and the Ferreira Borges market. 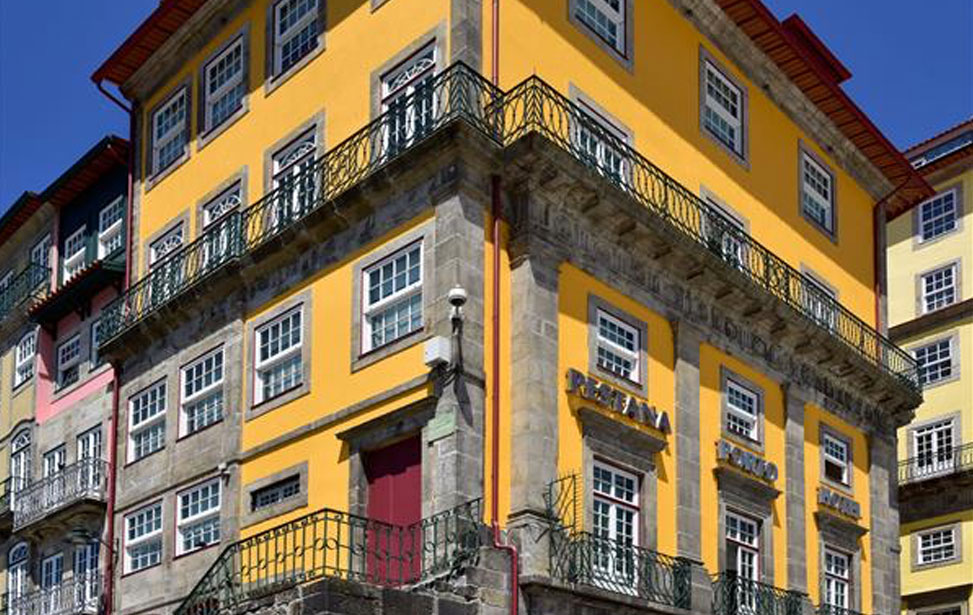 Probably this is Porto's most famous hotel, and it probably has the best views. Located on the corner of Praca da Ribeira, the Pestana Porto Hotel has made its way onto countless postcards and photos. Occupying part of a block of 16th, 17th and 18th-century building, and has been classified World Heritage by Unesco. Its privileged location is ideal if you wish to cruise down the River Douro, departing from the bank right in front of the hotel. Take the historic tram to Foz do Douro or visit one of the Port wine cellars. 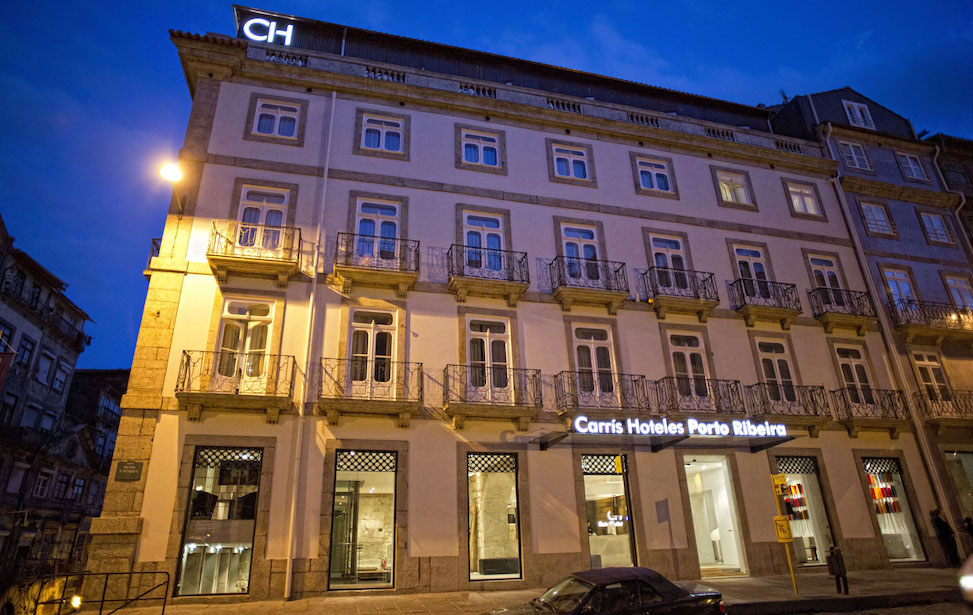 Located in the UNESCO World Heritage Centre of Porto overlooking the river Douro, the Carrís Porto Ribeira is very close to the Praça da Ribeira, the Palácio da Bolsa and the Centro de Congressos da Alfândega. Only five minutes walk from the train and metro stations and a 20-minute drive from the airport. The hotel also has its own restaurant, "Forno Velho". 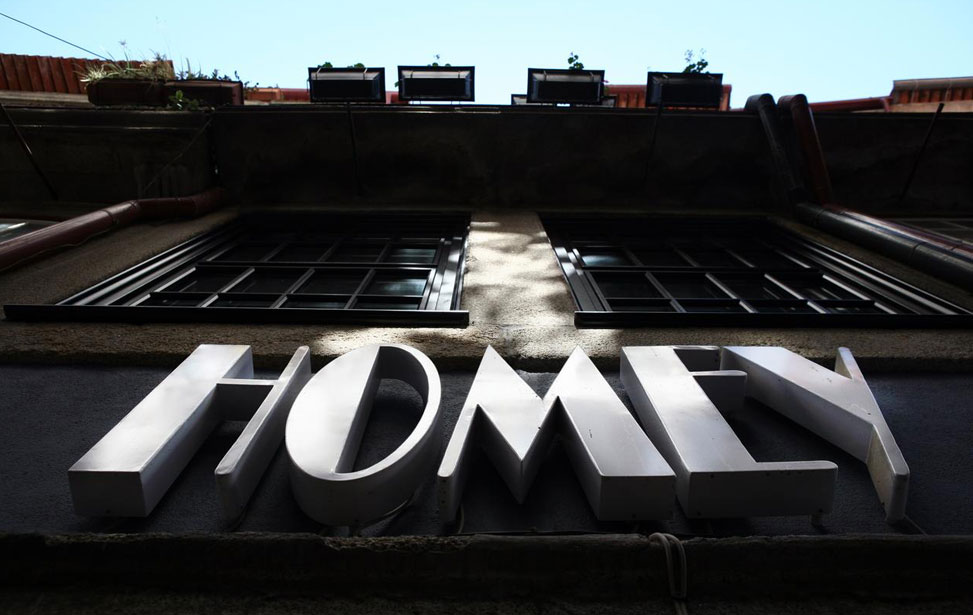 Amongst the back streets in the old part of Porto and close to the cafés, restaurants and the riverside. Cleverly restored old building, very welcoming, nicely furnished and comfortable. The best rooms are the ones which face the river, street-facing rooms can be a little noisy. Friendly staff and hearty breakfasts. 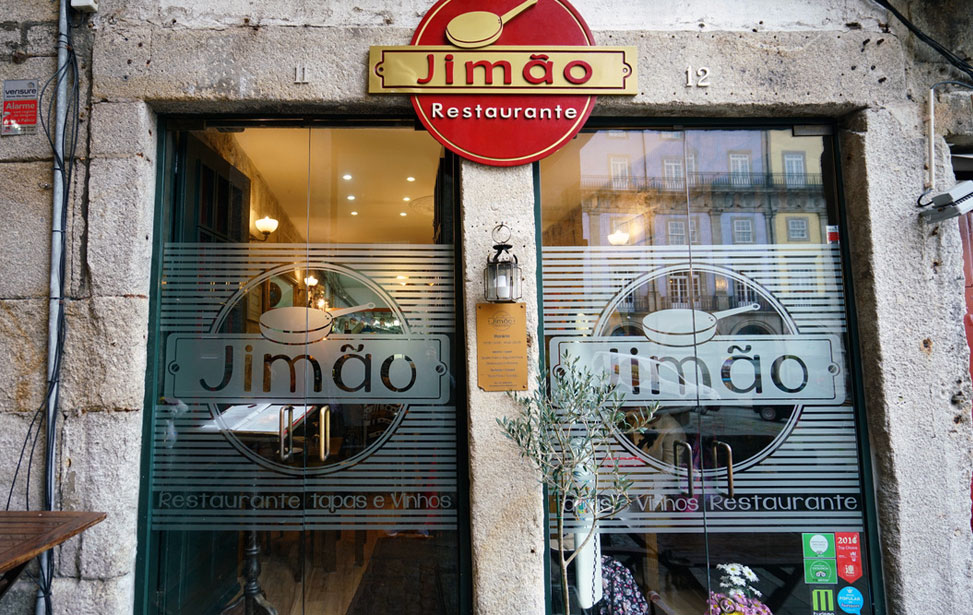 Ideally located on the Praça da Ribeira, this small restaurant has a homely and welcoming atmosphere with incredibly friendly staff. Serving dishes that are a creative twist on local flavours topped with an excellent choice of wine to complement the food. Dishes are of great quality and freshly cooked/prepared. Rightfully popular and it's advisable to pre-book if possible. . 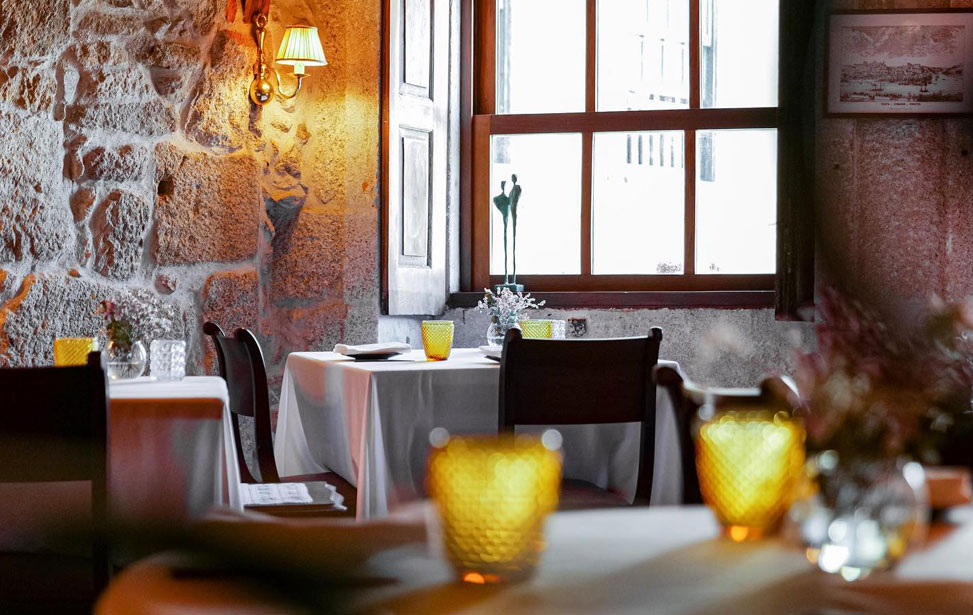 A charming establishment with interesting décor. Wine barrels and crates dotted about the restaurant. The welcoming and very friendly will direct you to your table on the second floor. With luck, you'll have a window seat that has views over the Douro and Louis I bridge. This family-owned restaurant has a strict ethos that stipulates all ingredients must be sourced from local farms ensuring a delicious and fresh dining experience. Diners need to allow time for their meals to be made to order, a great opportunity to enjoy a glass of wine from their extensive list and enjoy the atmosphere. 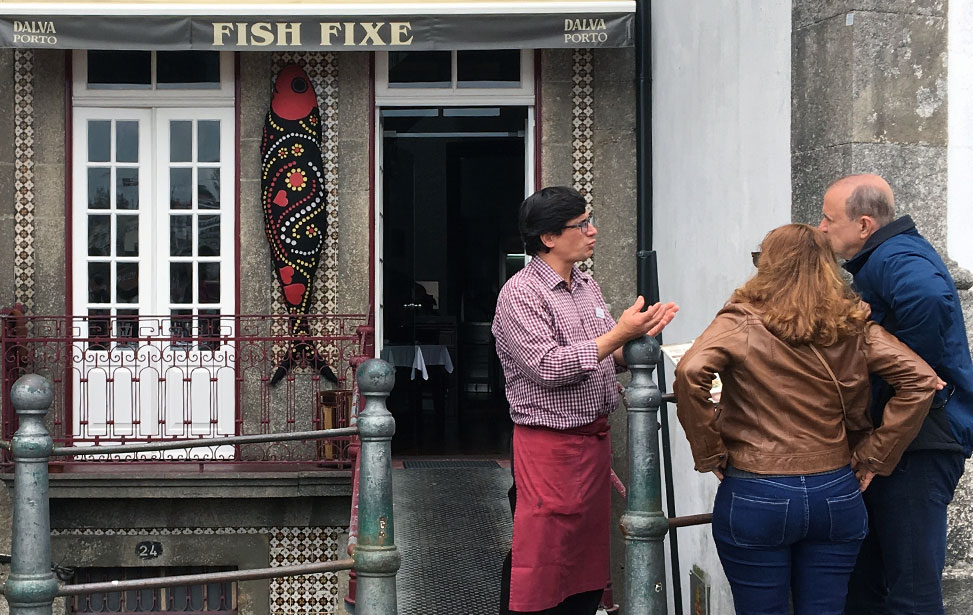 Two homely rooms make up the Fish Fixe (cool fish) restaurant complete with balconies and windows overlooking the river, bridge and views of the Cais de Gaia on the opposite bank. The second floor has the best views. As the name suggests this is a seafood restaurant serving unpretentious dishes with fresh ingredients, at sensible prices and served with a smile. 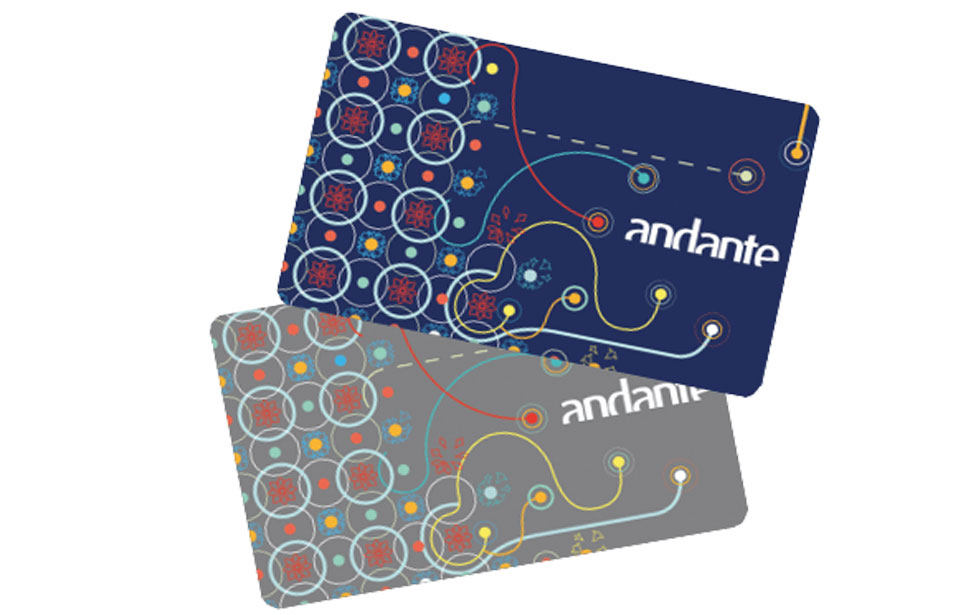 You can buy and reload the card at the multilingual machines in every tram stop, at mobility shops located in the main transport interfaces or at many newspaper and shops identified with the Payshop symbol. When buying the card you will need to choose the type of ticket you'll be filling it with. Fares are dependent on the zones you need to cross during your travel. The card must be validated at the yellow machines located in every metro and train stations or inside the buses. You need to validate the ticket each time you change transport.  Website