The town and district of Arouca lies within the mountainous area of the Beira Litoral region of north Portugal 60 kilometres (38 miles) South East of Porto. The town of Arouca is situated within the Arouca Geopark, a region protected for it's outstanding geological heritage and geotourism. Human occupation of the area go back to pre-roman times and successive civilisations have left their marks on the landscape ever since. Recently Arouca has gained world fame with the building of the worlds longest suspended footbridge which spans 516 metres (1,693 ft) across the jaw dropping gorge of the Paiva River. 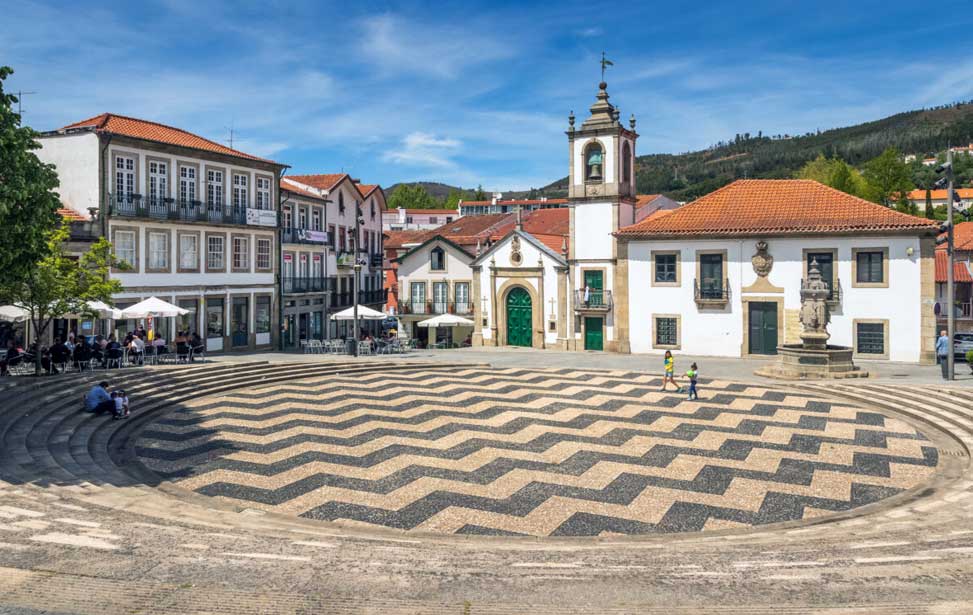 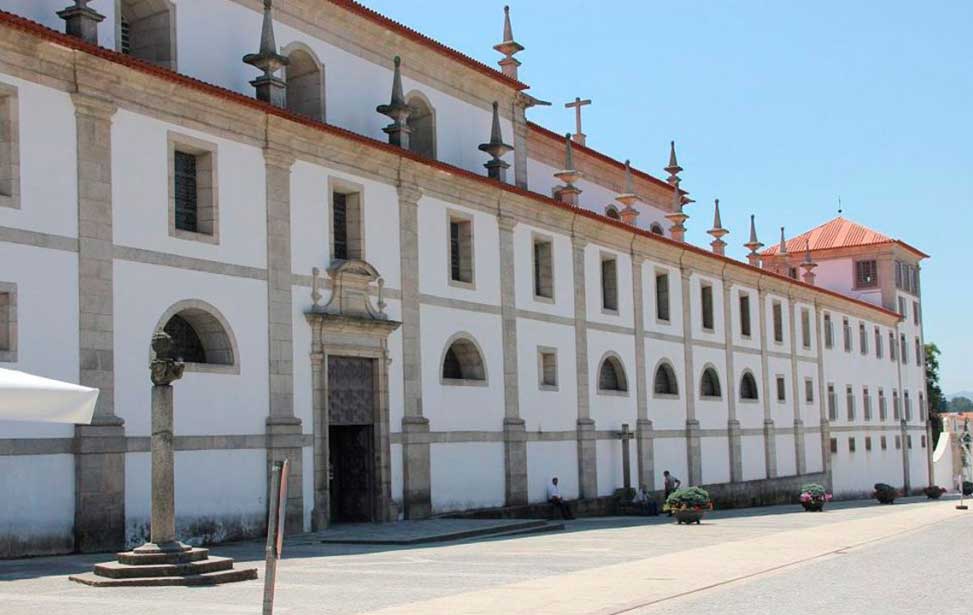 The history of Arouca is directly connected to the history of its famous Monastery. The town is situated close to the Serra da Freita, a part of the Freita mountain range, and the Geopark of Arouca, making it a popular base for hiking, nature tourism and extreme-sports activities alike. Within the town, you can find plenty of leisure activities in the guise of cafés, restaurants and bars, a cinema, a few interesting old churches and the museum of sacred art. The old town is quite small and is centred around the Praça Brandão de Vasconcelos. It is where you'll find some traditional eateries, the 17th-century mannerist Chapel of Santa Casa da Misericórdia and the town pillory perch on three steps and topped by an armillary sphere.

The Mosteiro de Santa Maria de Arouca huge façade dominates the centre of Arouca town and is one of the country’s largest granite buildings. It was founded most likely between the end of the 9th and the beginning of the 10th centuries. During the first two centuries of its existence, it welcomed both sexes through its doors. It became an exclusively female convent sometime before 1154.

Initially, the monastery was a private foundation and remained in private hands until the middle of the thirteenth century. Princess D. Mafalda (1195-1256) the daughter of King D. Sancho I and D. Dulce de Aragão and granddaughter of King D. Afonso Henriques found herself in a precarious position after her childhood marriage to the youthful heir to the throne of Castile was annulled in 1216. She became the monastery's most infamous resident and devoted the remainder of her life and wealth to the Monastery. All of the large income bestowed upon her by her father was devoted to pious and charitable uses in Arouca and beyond, Mafalda restored the cathedral at Porto, founded a hostel for pilgrims, erected a bridge over the Talmeda river and built an institution for the support of twelve widows at Arouca.

She was finally buried there after a long and full life. In 1616 nuns found her body incorrupt in its tomb and at the end of the 18th century, she was beatified by the pope. Today in Arouca, during the first weekend of May, she is celebrated during the festival of Sta. Mafalda.

The most notable spaces in the whole ensemble are the Church, the Choir of the Nuns, the Cloisters, the Refectory and the Kitchen. Inside the monastery is the Museum of Sacred Art, one of the best in the Iberian Peninsula.

Portugal's second Geopark and EGN/GGN member (April 2009 Arouca Geopark covers an area of 330km2 (205 sq miles). It was created with the sole purpose of preserving the unique geology, trilobites fossils, traditional villages and to promote geotourism and geoeducation in the area. One geological oddity the park is famed for is the mysterious birthing stones (Pedras Parideiras) where nodules of hard granite embedded in softer rock emerge from erosion processes. The Geopark is also homes to the worlds largest fossilised trilobites.

The park is rugged heathland surrounded by the Freita, Montemuro and Arada Mountains. The several rivers which cross this land offer excellent conditions for various activities, such as canyoning, canoeing, kayaking and mountaineering (25 routes in three areas of the Freita Mountain). In the River Paiva rapids, you will find some of the best locations in Portugal for rafting and kayak-rafting.

Along with nature and geology, human settlements are also preserved here such as the villages of Castanheira and Cabaços (Freita Mountain) and Janarde and Meitriz. These villages seem lost in time and are bursting with rustic charm, houses made from local stone, narrow streets on which can be found the occasional cow strolling along. Steeped in history and tradition located amongst impressive landscapes. 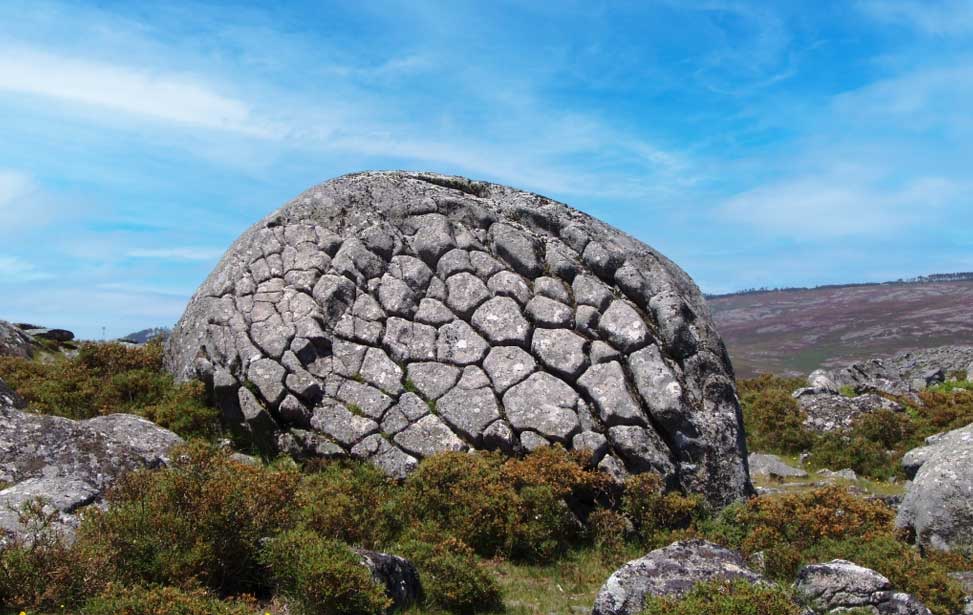 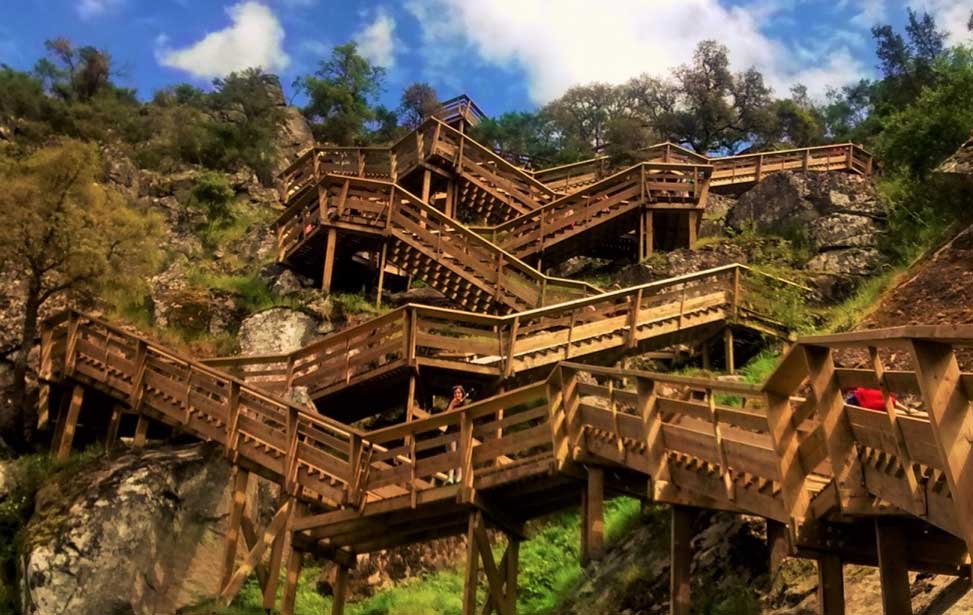 The park also boasts a steep and zigzagging eight-kilometre long wooden walking path. The Paiva Walkways (Passadiços do Paiva) is located on the left bank of the Paiva River. Access is gained in Espiunca ( 40° 59' 34.7" N | 08° 12' 41.19" W) or in Areinho ( 40° 57' 09.7" N | 08° 10' 33.1" W). The walkways traverse heathland across passing dramatic landscapes, eucalyptus forests, old bridges and waterfalls along its route. The terrain climbs upwards from Espiunca to Areinho but can be walked in either direction. To walk the walkways you should be of reasonably good health and be prepared with sensible walking shoes and clothing, and a bottle of water. The best way to experience this unique activity is with a guided tour group.

The recent completion of the 516 Arouca bridge, the world’s longest pedestrian suspension bridge, has global attention to Arouca. The Arouca 516 Footbridge spans 516m-long (1,692 ft) across the valley and hangs 175m (576 ft) above the Paiva River. The walking deck is made of a see-through open grid metal mesh. It takes a scary ten minutes to walk from one end to the other. 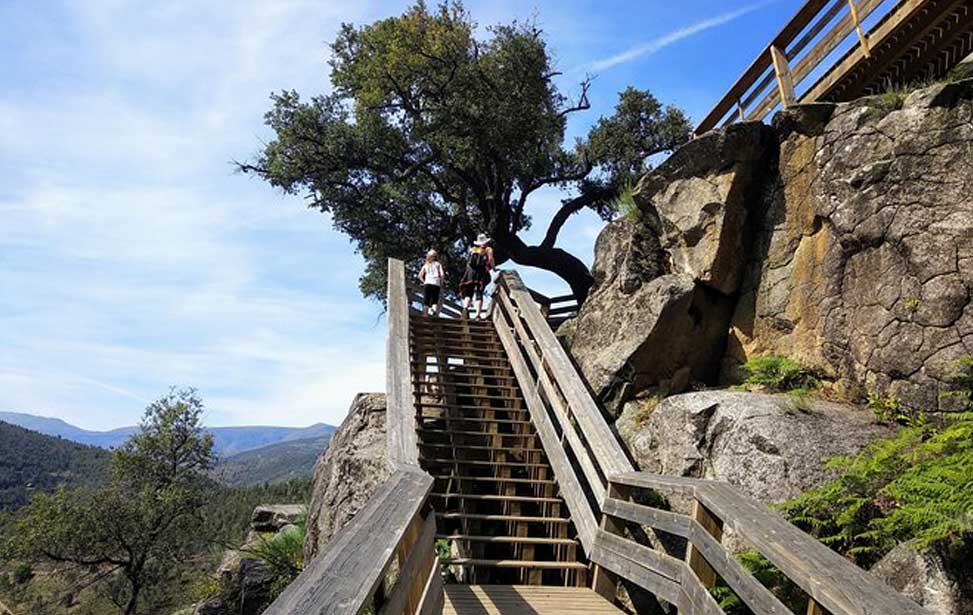 The spectacular Paiva Walkways is perfect for nature lovers who want to see idyllic landscapes. You’ll have a carefree day from the onset with round-trip transfers provided. Avoid long visitor lines by having an entrance ticket to Paiva Walkways included. After exploring the walkways, you’ll visit Aveiro on foot, enjoy a scenic boat ride along the canals, and also visit Costa Nova fishing village. 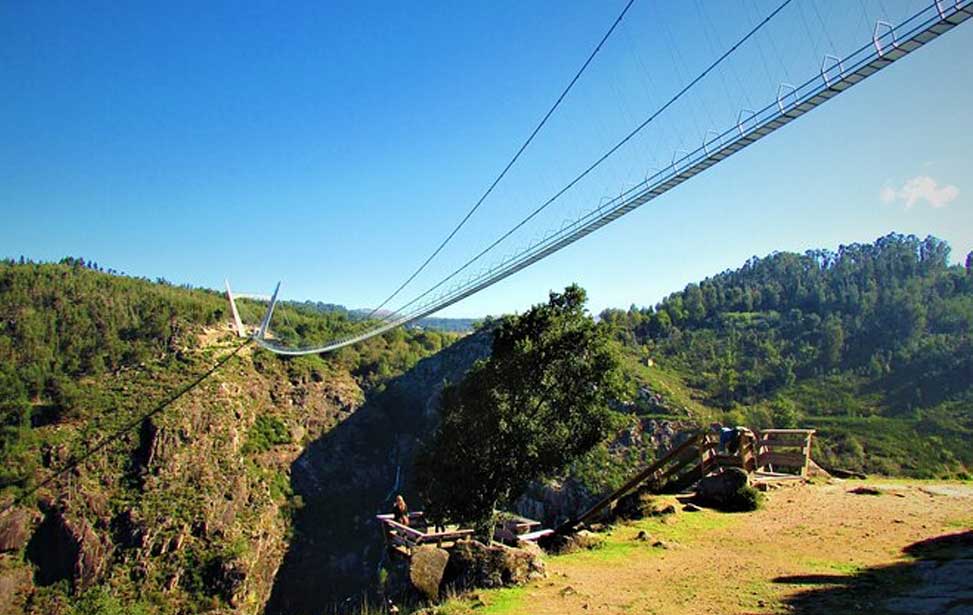 Our day starts with a kick of adrenaline! After pick-up in Porto, we set off towards the Paiva Walkways where you'll cross the Arouca 516 - the WORLD'S LONGEST SUSPENSION FOOTBRIDGE! The Paiva Walkways are one of the most beautiful walking trails in the world and a World Travel Awards winner. It is a 8km wooden boardwalk zig-zagging down along the left bank of Paiva river in Arouca Unesco Geopark. Lunch is another highlight: veal roasted in clay pots at a typical restaurant with panoramic views (fish or vegetarian options also available) Before heading back to Porto, we'll visit the little country side town of Arouca for a glance about local culture and the Portuguese architecture styles. Afterwards, is time to drive back to Porto. 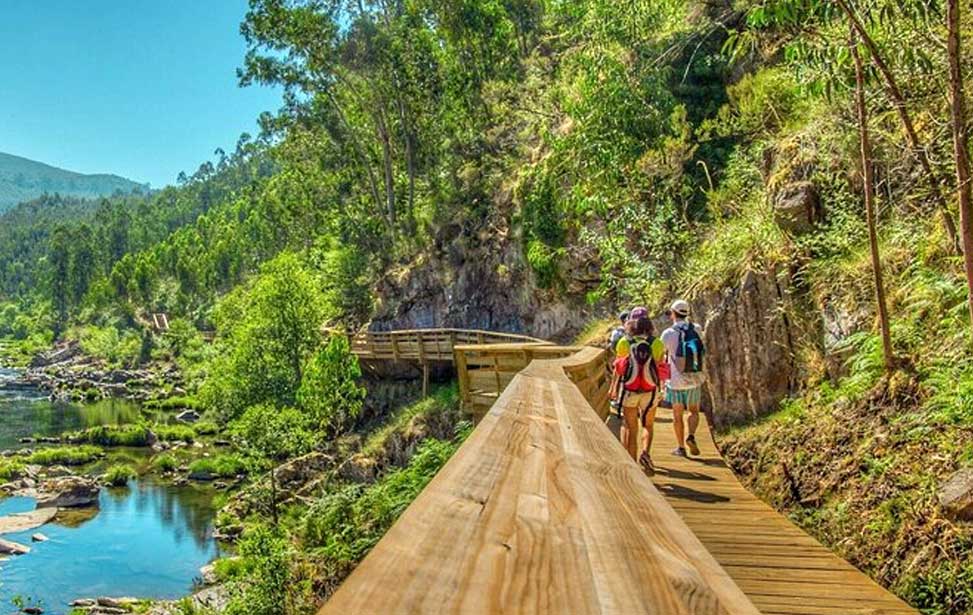 Benefit from personalised attention and a flexible itinerary on this private walking tour along the Paiva River. Learn about the surrounding ecosystem, flora, and fauna through your guide's commentary as you walk; you'll be able to focus on the experience instead of maps and navigating. 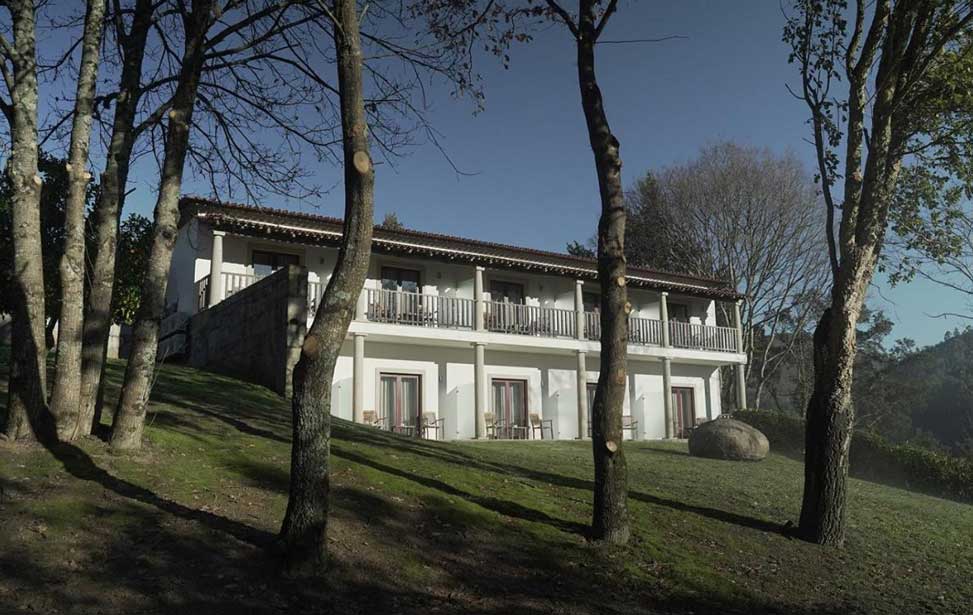 The Rural Quinta de Novais hotel is amazing 18th century farmhouse, located among lush garden filled with chestnut and oak trees. You will receive everything you need for a good holiday: swimming pool, gym, jacuzzi, restaurant. If you love an active lifestyle, then you will like hotel's offer for hiking, mountain biking, rafting, cannoning and climbing. The hotel is located about fifty kilometres from the Francisco Sá Carneiro airport. 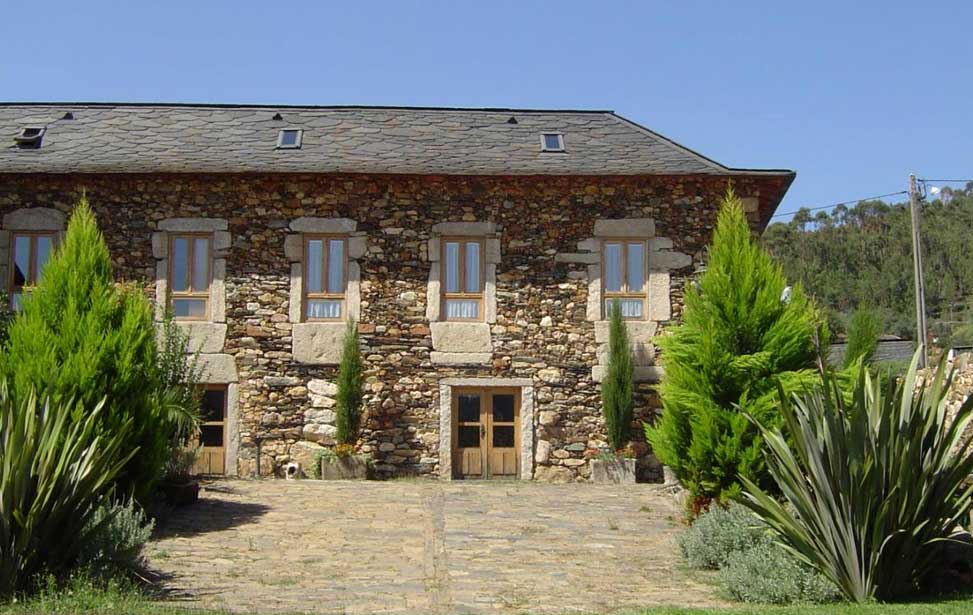 Casa do Pinto is a cottage, dated 1764, having completed its last reconstruction in 2008. House is equipped with two living rooms, six rooms with bathroom and TV, bar, and large panoramic porch. Casa do Pinto is great place to rest and enjoy typical rural landscape. 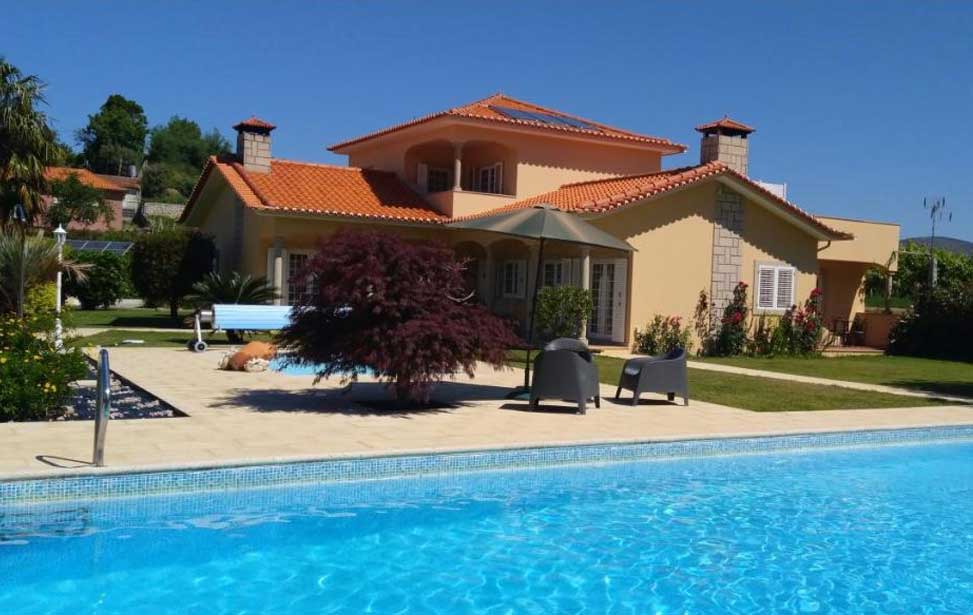 Boasting a garden, an outdoor pool and mountain views, Arouca Passadiços Alojamentos is situated in Arouca. The air-conditioned accommodation is 35 km from Viseu, and guests benefit from complimentary WiFi and private parking available on site. The holiday home features two bedrooms, a bathroom, bed linen, towels, a flat-screen TV with satellite channels, a fully equipped kitchen, and a patio with garden views. The holiday home features a children's playground, a barbecue and a terrace. 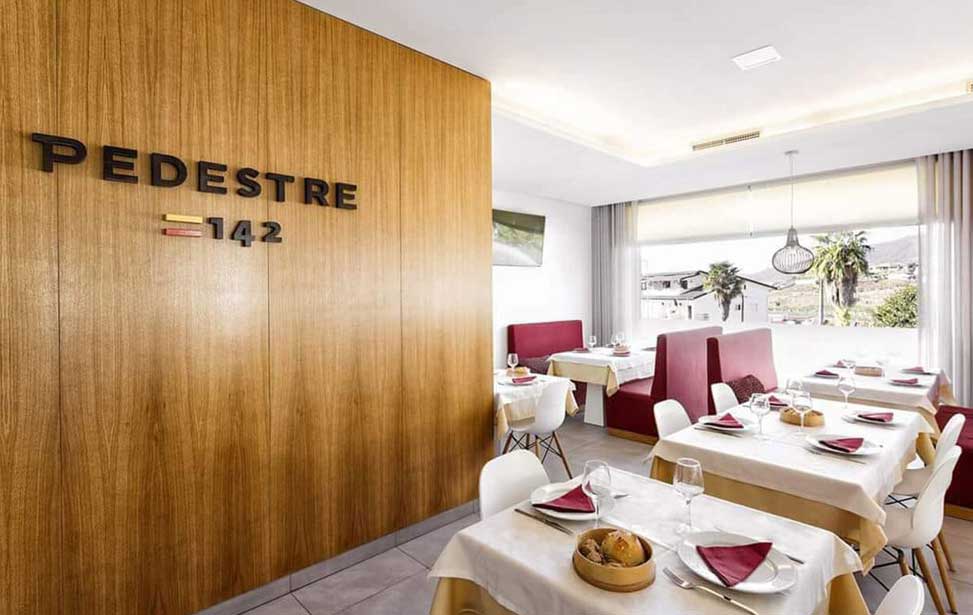 Explore the Arouca region through it's food and flavours. Utilising only the freshest of local produce Pedestre 142 serves local cuisine cooked with care and passion. Dinning occurs in a relaxed and friendly environment. 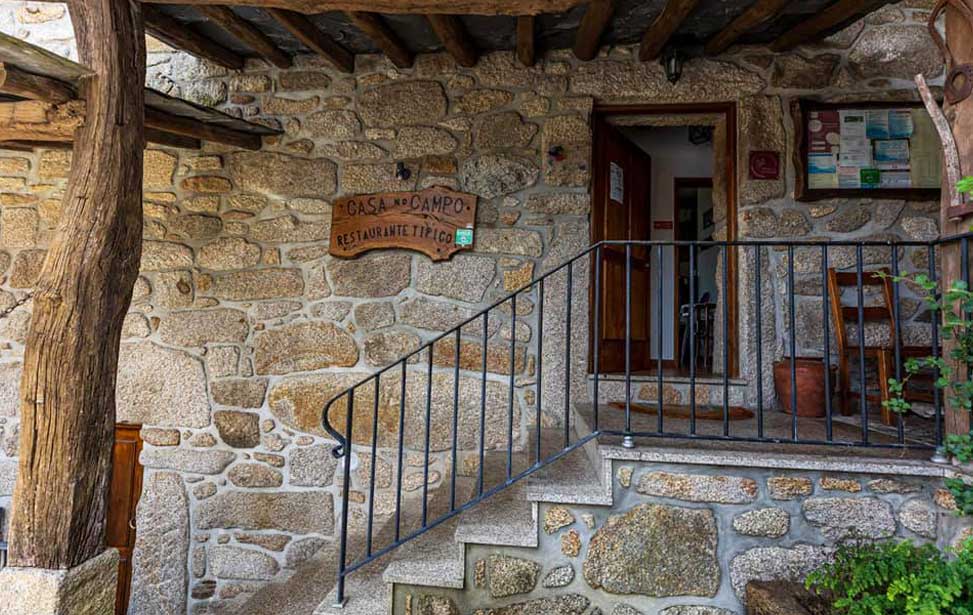 Casa no Campo means country house and boy they're not kidding! Located way off the beaten track and well worth the effort of getting there. The views over the Moldes valley are spectacular. The cuisine as local as possible and served in a traditional manner. Look out for the codfish in corn bread, the oven roasted meats and the «sopa seca» (traditional desert made with bread) and custard. 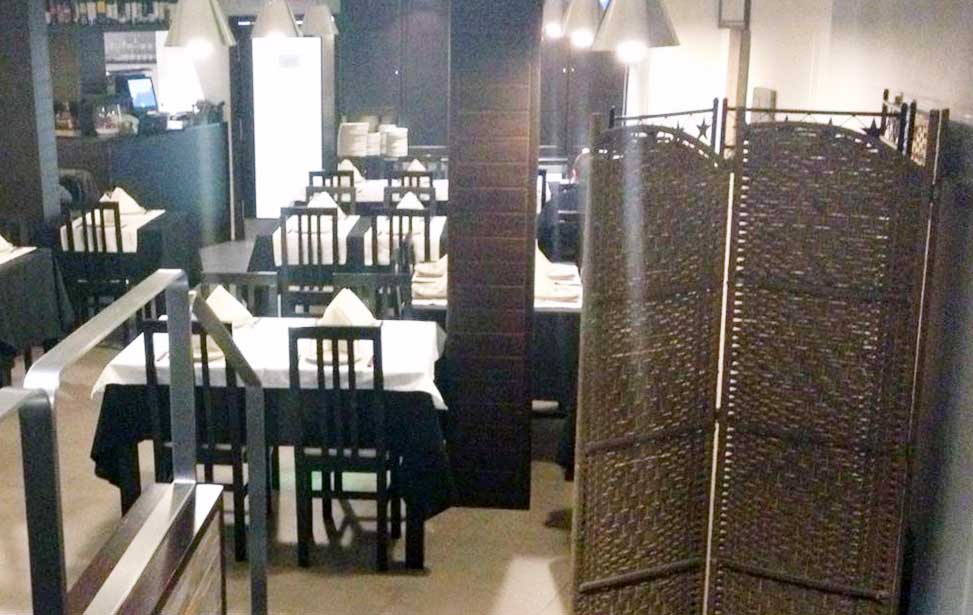 Good ol' fashioned great service, traditional local fare served in generous portions. You'll certainly leave this treasure of a restaurant fully satisfied. Your wallet won't take a bruising especially if you decide to share the main between two. Parlamento is popular and can get busy at peak times. The veal is their house special although all their meat dishes are amazing.