This small yet dramatic protected area was established in 1983 and is situated North West of Vila Real. This mountainous region covers 72,000 hectares of rugged yet beautiful terrain and forms part of the Marão mountain range, the boundary between the Minho and Trás-os-Montes regions. Its diverse habitat is home to several rare species of fauna, flora and wild animals. Take one of the walking trails suggested by park officials and set off to look for wolves, wildcats and Pyrenean desmans. Up in the skies, you can see Peregrine Falcons and, if you’re lucky, you’ll also catch a glimpse of the Golden Eagles. You will also find trout, Iberian nase and the ray-finned barbell in the rivers. 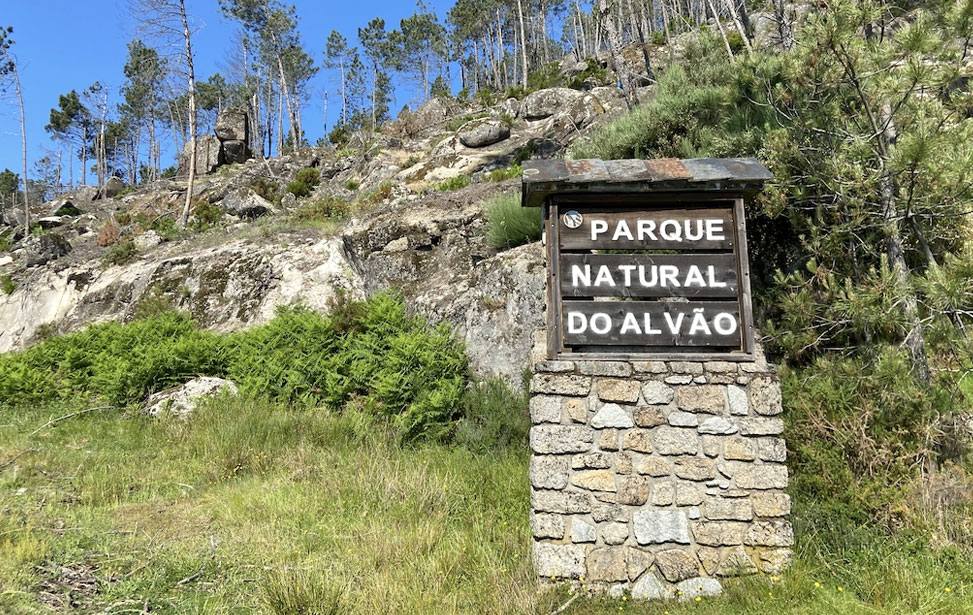 The landscape is divided by two geological formations, the higher zones up to 1000m high consist of granite, rocky outcrops, hardy shrubs and grasslands. At lower altitudes, the terrain is composed of schist bedrock, forested areas and altogether more greener. The impressive Fisgas de Ermelo cascades down 450m from one landscape to another. From different viewpoints, it's possible to view these falls from the top and from below.

The villages in the park such as Ermelo, Fervença and Lamas de Olo contain thatched stone buildings that seem stuck in time. The roads narrow to the width of a horse cart, easily blocked by horned cattle (Maronês), medieval stone bridges traverse mountain streams, and century-old Espigueiros are still used to hold corn. Life in the park is preserved in time.

WEST OF THE PARK AND THE TERRAS DE BASTO

The area west of the Parque Natural do Alvão in the Minho is known as the Terras de Basto and consists of three villages which share the same suffix: Celorico de Basto, Mondim de Basto and Cabeceiras de Basto. The name is derived from several life-sized Granite statues laid inside the graves of ancient Lusitanian warriors, "Eu basto (I suffice)" was their belief when fighting the Romans. Most of which now is housed in the region's museums. The region is exceptionally fertile, along with the high-quality food produced here. Fine Vinho Verde wines are also produced here. The Basto Sub-region produces Vinho Verdes typically higher in alcohol than other sub-regions. They present a very fresh aroma of lemon and green apple in the whites. Reds are also widely produced here, presenting a high vinosity and a full and fresh bouquet. 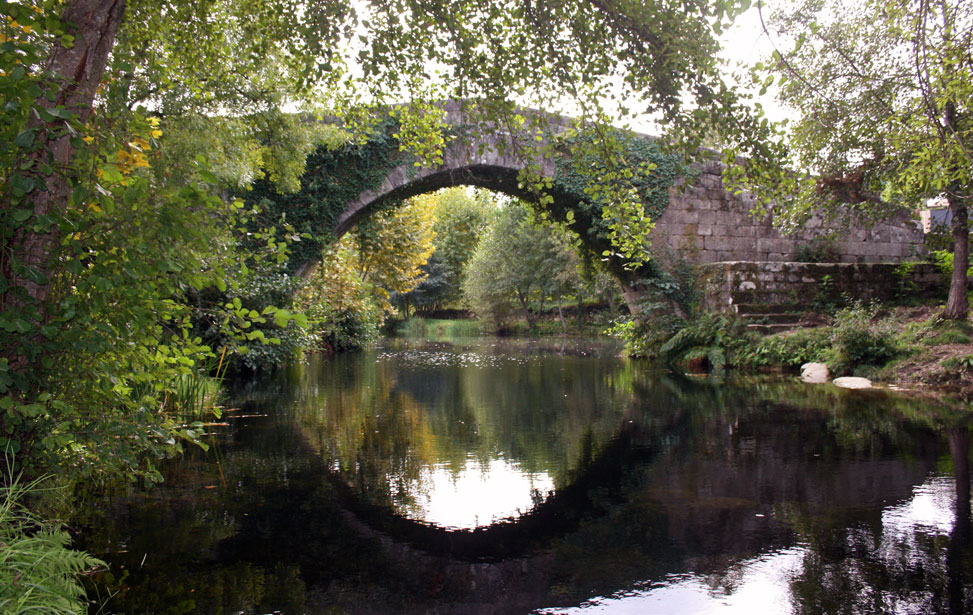 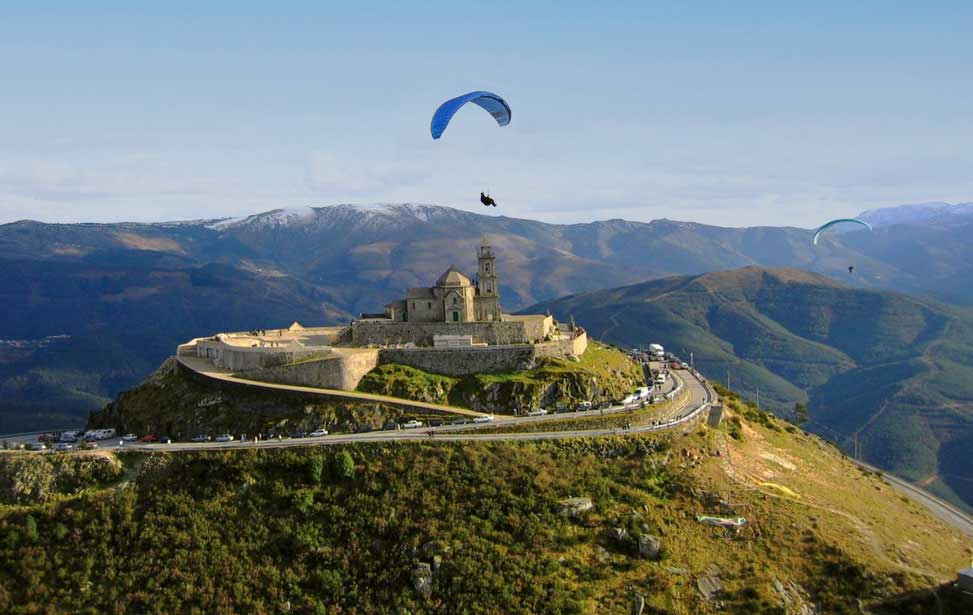 One hour by road from Vila Real or Amarante the attractive little town of Mondim de Basto makes a good base for exploring the natural park. Other than a pleasant municipal park and the old church Igreja Matriz the town's attractions are scarce. There are, however, a decent selection of accommodation and places to eat. Close to Mondim de Basto's campsite is the Ponte de Vila de Viando. The medieval single arch stone bridge crosses the river Carbril. The area around is beautiful, with a small waterfall cascading downstream from the bridge.

East of Mondim there's a well-marked footpath that ascends 996m up the Monte Farinha mountain to the Nossa Senhora da Graça chapel at its peak. The three-hour hike is rewarded by breathtaking 360º views at the top. If that still isn't enough for you, it's possible to climb to the top of the church's spire. The hiking route starts and ends N312 just outside of Mondim. Alternatively, you can drive or cycle there.
• Percurso Pedestre Srª da Graça trail (PR1)   Info & Map

West of Mondim the pleasant yet sleepy village of Celorico de Basto rises steeply up from the river Rio da Vila in between the Barroso and Marão Mountain ranges. The town boasts an ancient history however albeit few old stone buildings and an attractive church or two there isn't much interest in the town itself. The former railway station is now a visitor centre and stop-over point for the Ecopista do Tâmega nature trail which follows the route of the decommissioned railway line that once connected Amarante with Cabeceiras de Basto. This wonderful eco-trail allows you peaceful access, on foot or by bicycle, through the Tâmega Valley, the Marão Mountain Range, the Nature Park of Alvão, and Terras de Basto. The historic centres, the villages, the vineyards and the forest are so unique to this region. | Ecopista do Tâmega   Info & Map

Venture out of Celorico de Basto and appreciate the areas true attributes. Arrive up the Capela Nossa Senhora do Viso sea upon its commanding peak will reward you with incredible vistas of the surrounding parkland and beyond. A couple of kilometres south of Celorico de Basto is Arnóia and its small medieval castle. The walk up the path from the little hamlet below is pleasant and rewarding. 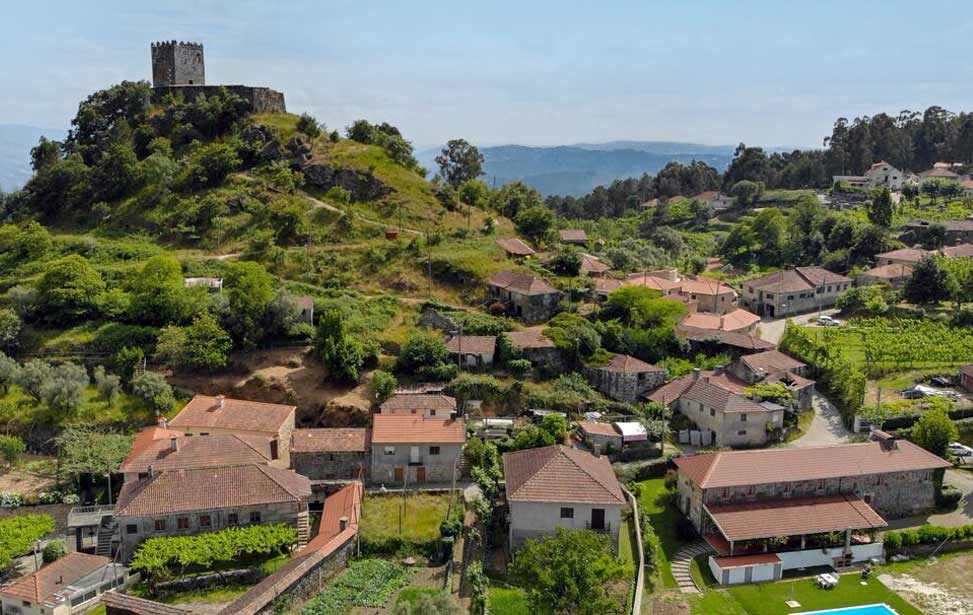 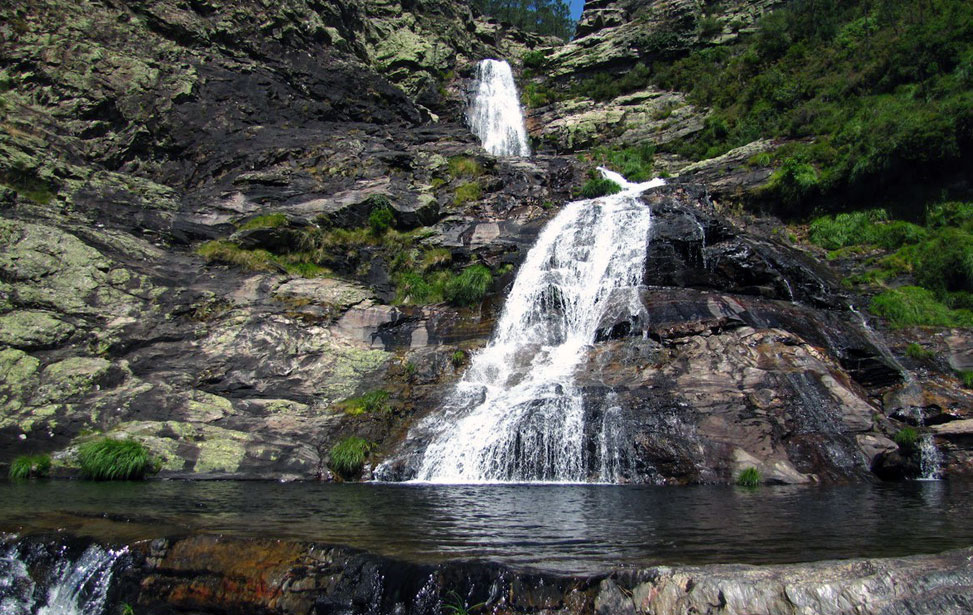 Despite boasting to be the largest village within the boundaries of the Parque Natural do Alvão Ermelo is a sleepy kind of place that only seems to get animated during its annual festival Feira de São Vicente (August 7–8). There isn't much in the way of services and accommodation in Ermelo however the village's attraction is its location. Ermelo makes a great starting point for mountain hikes.

The PR3 - Fisgas de Ermelo route begins close to the Parish Church in Ermelo and follows the main road before turning towards Catrinas. The long trail becomes a long climb up the mountain following the course of the river Olo and the amazing views of the Alvão Natural Park start to open up beneath you. The highlight of the trail is the Fisgas de Ermelo Waterfalls. The falls are one of the tallest in Portugal and cascades down a steep precipice in various steps. Access to the top and bottom can be reached by narrow roads.
PR3 - Fisgas de Ermelo   Info & Map

Situated on a granite plateau 1000m above sea level surrounded by oak groves and marshes Lamas de Olo maintains an atmosphere of peace and simplicity. Somewhat untouched by the modern world this traditional village is one of the gems of the Parque Natural do Alvão. It’s noted for its age-old granite houses with thatched roofs, stone walled narrow streets and old espigueiros. The irrigation channels dug into the region's ground emanate out from the River Olo and are known as "rega de lima" (lime irrigation) and converts make the land moist and pasturable for the indigenous Maronesa cattle.

TOP TOURS IN THE NATURAL PARK OF ALVÃO 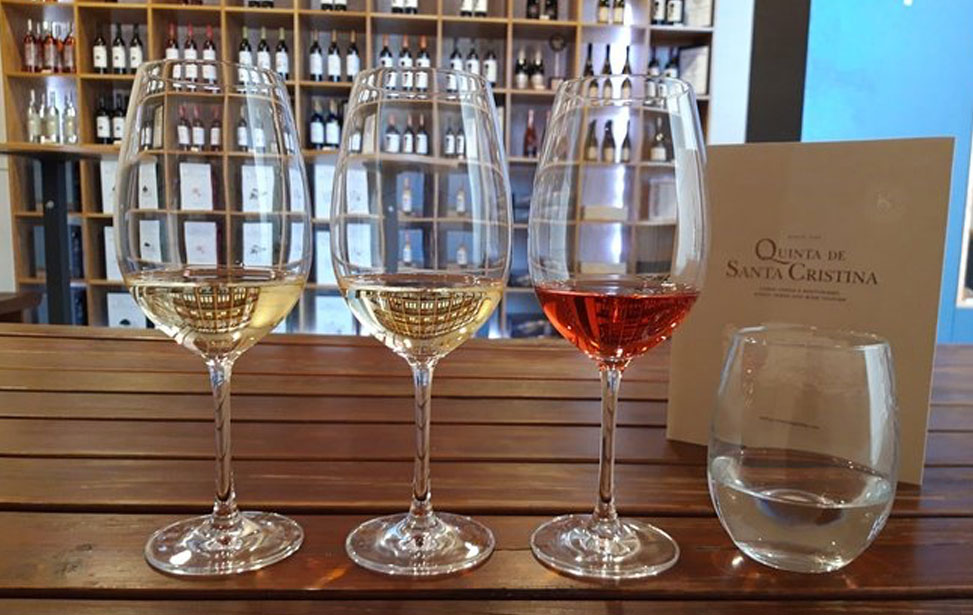 Discover the best of Portuguese wine during this two-hour small-group wine tour from Porto. In the renowned Vinho Verde region, just 45 minutes outside of the city, you’ll visit the family estate of Quinta de Santa Cristina and taste three of its delicious wines. You’ll also tour the ground’s winery, visit the chapel of Santa Cristina and wander through gardens as you explore the estate. Snacks will be included in your tour, and a professional guide will provide you with helpful information about the region. 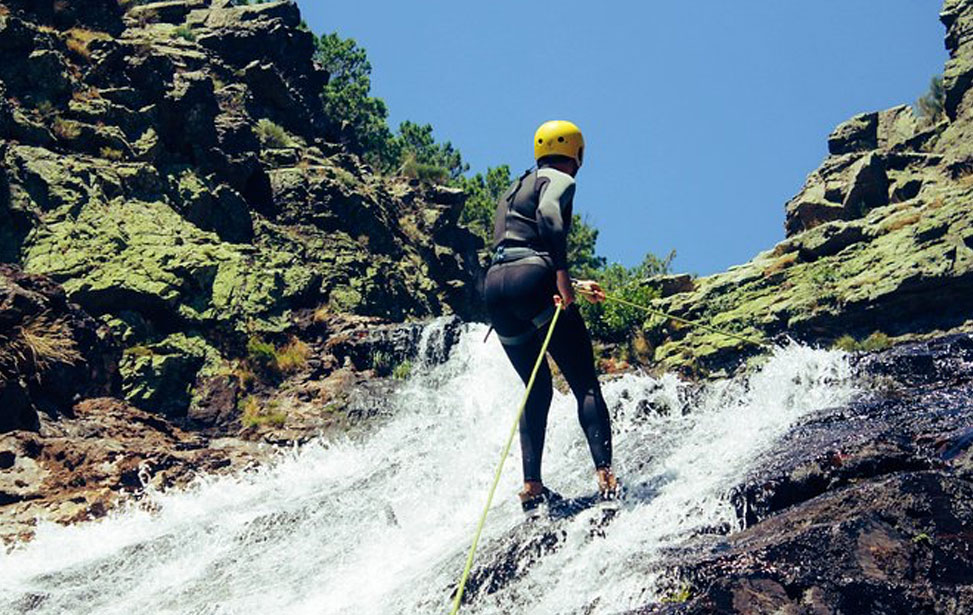 Canyoning is the ultimate activity for those who enjoy nature and feel the frill of the wild. In this activity, we descended the most beautiful waterfalls in Portugal. One of the seven wonders of Portugal. You'll be welcomed in Celorico de Basto and after the main event, you'll visit a winery for tasting some delicious Vinho Verde. 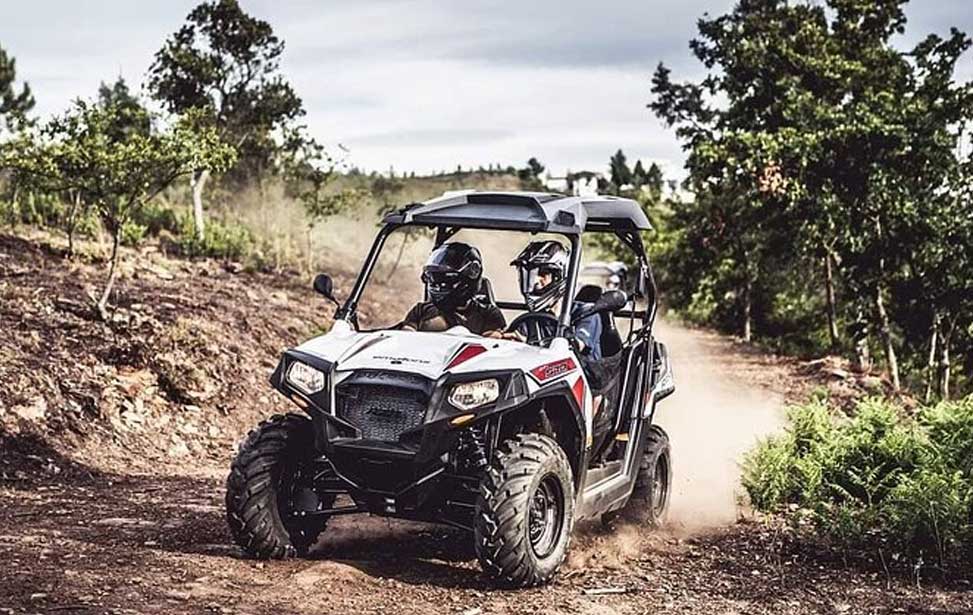 Adventure lovers will be able to drive a fantastic Polaris RZR in one of the most beautiful places in Portugal. This operator has two meet-up options available. You can either meet at the departure designated or select a location for pick-up. The tours are guided and customers will travel through incredible places, viewpoints, rivers, steep climbs and descents, all with maximum security. At the beginning of the activity, a safety briefing and mountain driving are carried out.